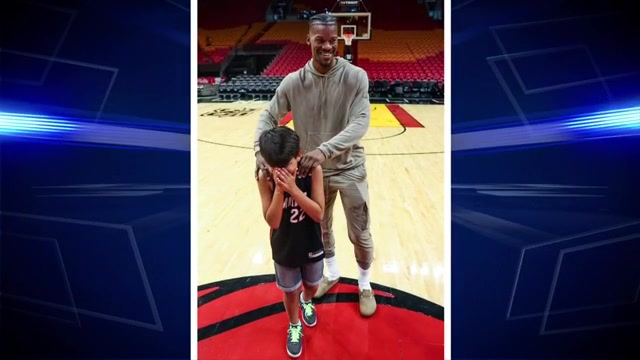 MIAMI (WSVN) – A 12-year-old boy who traveled to South Florida from South American with his family scored big at a Miami Heat game after they received some disappointing news.

Felipe Velazquez and his sister Zoe Velazquez flew 4,405 miles from Argentina to Miami to see the basketball team and his favorite player, Jimmy Butler, at Tuesday night’s game.

But when they arrived at the Miami-Dade Arena, the family learned Butler would not be playing.

The team came up with a plan to turn the child’s frown upside down.

What followed was a once-in-a-lifetime moment that shows the power of sport and how basketball can bring people together from every part of the world.

Just before tip-off, the Heat recognized the young fans, much to their surprise.

The VIP treatment for the visitors continued on Wednesday, when the Heat brought the family back to the arena to personally meet and spend time with Butler.

The Heat star signed a jersey and took a picture with the entire family.

Butler also gave them a behind-the-scenes tour of the Heat’s locker room, giving them an afternoon with an NBA superstar that they will forever remember.

Analyst and former NBA player Jamal Crawford was the architect behind the encounter after seeing Felipe during the TNT broadcast of the game and reaching out to Butler. Crawford and Butler were teammates on the Timberwolves.

Shaquille O’Neal also gave an assist. He reached out to Alonzo Mourning to do something special for Felipe and his family.