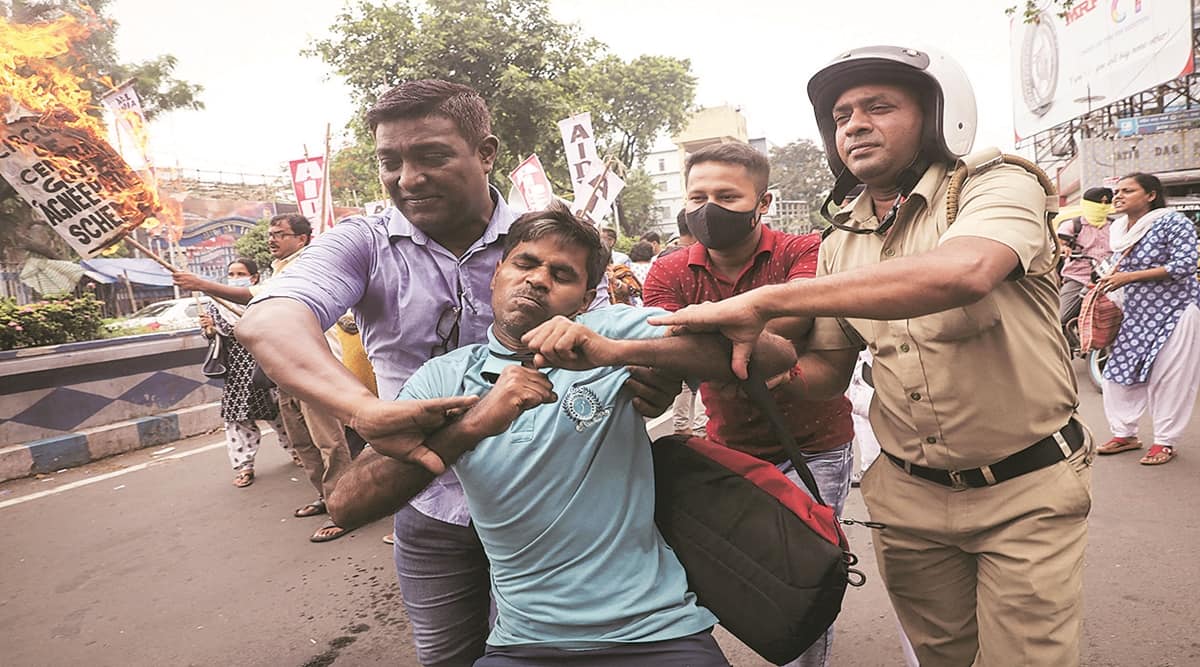 Even as protests over the Agnipath scheme raged across the country, the government on Saturday announced reservation in job vacancies across sectors for soldiers recruited under this scheme, to be called ‘Agniveers’, and said it will look into any grievance about the new military recruitment scheme “with an open mind”.

Union information and broadcasting minister Anurag Thakur appealed to the protesters to shun violence and come forward for talks, asserting that the central government is ready to look into their grievances with “an open mind” and make changes, “if required”. “Violence has no place in a democracy,” the minister said replying to questions at a conclave.

The home ministry announced to reserve 10% vacancies in the central paramilitary forces and the Assam Rifles, besides a three-year relaxation in the upper age limit. A home ministry tweet added, “Further, for the first batch of Agniveer, the age relaxation will be for 5 years beyond the prescribed upper age limit.” At present, jawans between the age of 18 and 23 years are recruited in the paramilitary forces.

Defence minister Rajnath Singh also on Saturday approved a proposal to reserve 10% the job vacancies in the defence ministry for ‘Agniveers’ who meet requisite eligibility criteria.

“The 10% reservation will be implemented in the Indian Coast Guard and defence civilian posts, and all the 16 defence public sector undertakings,” Singh’s office said. It said this reservation would be in addition to the existing quota for ex-servicemen. “Necessary amendments to relevant recruitment rules will be undertaken to implement these provisions,” the defence minister’s office tweeted. “Defence Public Sector Undertakings will be advised to make similar amendments to their respective recruitment rules. Necessary age relaxation provision will also be made,” it said. The approval to the proposal came soon after Singh held a meeting with the top brass of the Army, Navy and the Air Force.

Besides, transition from electrical ratings in Indian Navy to certified electro technical officers in merchant navy and transition from cook in Indian Navy to certified cook in merchant navy. The statement said some of the schemes are devised for Agniveers with a diploma in mechanical or electrical engineering or ITI trade certificate in electronic or Electrical stream, either joining with these qualifications or acquiring these during their tenure with the Indian Navy. It said the MoPSW will issue Indian National Database of Seafarers’ (INDOS) and Continuous Discharge Certificate (CDC) for those Agniveers who intend to explore in any of the said schemes through Indian Navy.

Union minister Hardeep Singh Puri also on Saturday said the PSUs under his housing and petroleum ministries are working on hiring ‘Agniveers’ after their four-year service in the armed forces. “This is a great scheme. I can say this on record that many PSUs under my ministries are already working on (hiring) trained manpower (Agniveers)… their skills can be utilised in PSUs,” he said.