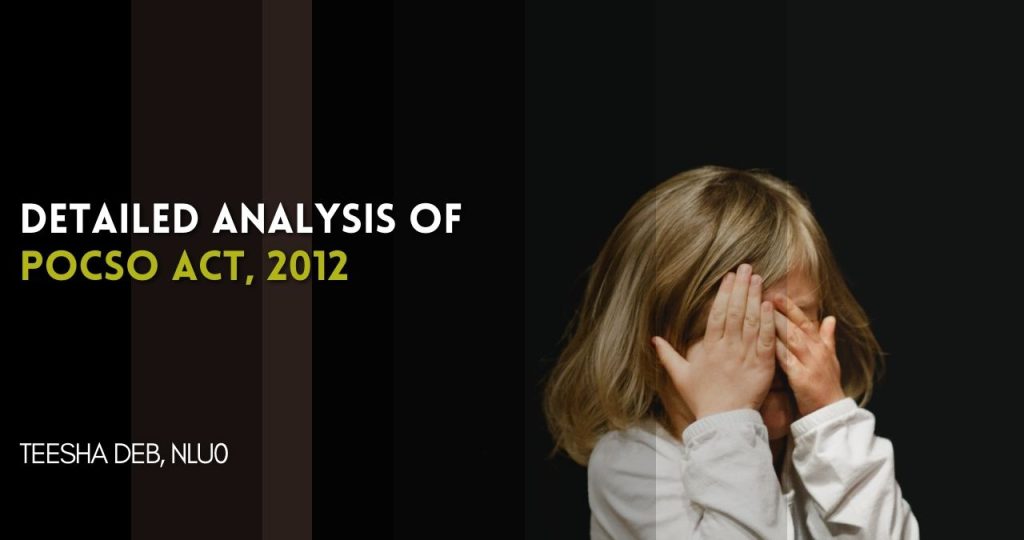 In this Article, the author has given a detailed analysis of POCSO Act. The author is associated to the National Law University, Orissa.

While sexual offences are grievous in nature in themselves but the ones committed against children are considered even more heinous as children are among the most vulnerable & innocent victims of such crimes. According to a report in 2007 of the Women And Child Development Ministry, 53.2% of the children have faced more than one form of sexual abuse of which 52.94% were boys. Further, the National Crime Reports Bureau released a report in 2018 stated that the number of reported rape cases was 21,605.

The worst part is that the number of reported cases is less than the number of offences as the abusers generally are people who knew the child at personal capacity and were in position of trust and responsibility. The Ministry of Women and Child Development was a driving force behind the passage of the POCSO Act, which was designed to confront the egregious offences of carnal nature and sexual exploitation of minors via judicial safeguards that were comparatively less vague and more rigorous than the provisions of the Indian Penal Code in consonance with the international guidelines of WHO.

This was done with the objective of constructively combating such activities. In a parallel vein, the Juvenile Justice Act was passed into law in order to shield minors from crimes like “sexual assault, sexual harassment, and pornography” and to provide for the institution of Special Courts to conduct special proceedings for crimes of such manner as well as connected concerns and occurrences.

POCSO was implemented in 2012 to fulfil purpose of safeguarding minors under 18 from crimes which are sexual in nature by implementing optimistic initiatives for the dispensation of expeditious justice and increase accountability concerning such subjects.  Before establishment of this statute, there was the absence of any special law which could be entirely designated for the offenses perpetrated against minors. Instead, the offenses were recorded under the Indian Penal Code, 1860, or the Criminal Procedure Code.

In addition, the IPC was quiet on a number of offenses and did not contain any applicable provisions for such offenses; as a result, those who committed the offenses were given a free pass, and there was lack of implementation or even mandating punishment upon such perpetrators.   Because the regulations were not in consonance with present times, it necessitated the establishment of a new judicial procedure for minors.

This culminated to the passage of the Protection Of Children from Sexual Offences Act, and there was a new inclusion to Article 15 clause (3) asserting upon the Government’s authority to enact specific statutory requirement for protection of minors. Both of these modifications were assessed to be crucial.

While analysing the implications and the implementation of the Act, there are 3 broad impacts under which we can effectively scrutinize its effectiveness.

There are various relaxations offered to children for recording their evidences and providing their statement throughout the trial and investigation procedure. Moreover, special courts ensure utmost security of the child. However, some   regulations are susceptible to exploitation, such as non-recognition of consensual intercourse between an adult and a minor or among minors.

No clause specifies the documentation needed to establish the victim’s or child’s age. In order to determine the age of such juvenile assailants, the court uses Section 12 of the Juvenile Justice Act. There have been judgements clearly specifying that documentation like “birth certificate, matriculation certificate, school certificate, and bone ossification test” are some of the records that are regarded as valid evidence. The skeletal endochondral test also provides a reasonable estimate of the assailant’s age. The Legislation needs to specify the documents that are required to verify the age of the sufferer.

While the Act provides for speedy delivery of justice to the victim within 1 year and recording of the child’s statement/testimony within 30 days. Such laws have been routinely disregarded or ignored by courts due to the overburdening of cases.

Lawyers often fight for postponements due to extraneous factors, and if the sufferer is summoned to trial again six to seven months following the event, their memory of the particular specifics of the incident may get blurred as a result of the postponement. Despite temporary reimbursement being interpreted in a restricted manner, individuals should understand that it includes the minor assailant’s recovery necessities.

Because of the Protection Of Children from Sexual Offences Act, the opposition is permitted to raise queries, but they must do so in a respectful manner and solely through the court. Even if this safeguards the sufferer from hounding during the court hearing, the connection between the complainant and the prosecuting attorney must be properly described so that the complainant is capable of responding to the queries or describing the circumstance with the litigator for additional examination or tribulation and refrains from silencing from providing the details of the incident. This will guarantee that the complainant is not accosted during the court hearing.

POCSO Act has witnessed many administrative pitfalls during implementation. Owing to prolongation of time required in filing of First Information Report and pursuing the “Medico-Legal Case” the authorities were unable to satisfy the statute of limitations notwithstanding numerous attempts on their part. The exam is frequently skipped because people have erroneous ideas about what it entails and how it can affect the sufferer’s wellbeing.

Greater responsibility must be undertaken by health professionals while they are performing the test on the suffering minor because the environment around them inside the facilities is usually very unpleasant and hostile and they should be treated with utmost softness and patience. The police should also abide by the same etiquette during the investigation.

There have been certain noteworthy instances of the Supreme Court, the High Courts and even the POCSO courts of interpreting the statute in a detrimental manner to the prejudice of the victim and the society at large. Some of the cases are –

From the Protection of Children from Sexual Harassment Act it can be conclusively deduced that the Legislation has the potential to deliver a significant reduction in the multitude of offenses of the nature discussed previously against minors; however, the same shall happen if the bureaucratic and adjudicative framework functions to implement the safeguards in an appropriate and lawful manner. Perhaps certain novel measures must be introduced within the current Legislation in order to prove the assailant’s age when it comes to the documentation that are necessary to be presented. The Legislation is undoubtedly quintessential in its essence with its primary objective being introduction of constructive impact in the upbringing of minors. These modifications intend upon sensitizing minors about crimes of such nature, as well as the necessity of reporting such crimes to the concerned authorities in order to prevent further occurrences to ensure the betterment of the society as a whole.

To overcome the challenges associated with the execution of the legislation including the absence of appropriate special courts, the absence of sensitivity training for detectives and attorneys while interacting with the assailants of such crimes and the insufficient incarceration record, the procedures below must be followed. Prompt compliance is required with the directive given by the apex court of our country which was “There should be establishment of special courts within sixty days of the decision, in each district with more than 100 pending cases under the act”. The legitimacy and applicability of the capital punishment in certain circumstances must be openly studied and contested.

Originally, POCSO did not offer compensation schemes for Minors who were subjected to offences of explicit nature. The apex court of our country paid attention to the omission and directed that sufferer’s be compensated under the “National Legal Service Authority’s Compensation Scheme for Woman Victims/Survivors of Sexual Assault/Other Crimes.” However the problem which arises is that POCSO is gender neutral but the compensation guidelines are female centric and this is a legislative issue which requires redressal.

Everyone’s knowledge and sensitivity upon the matter is crucial for preventing violence. In order to enlighten the populace regarding the legislation and the integrity of children, major public sensitization campaigns must be undertaken. The legislation should also be incorporated into the classroom education. In addition to societal shame and mental anxiety, sufferers of exploitation at the hands of close relatives may become combative out of dread of additional humiliation and stigmatisation. This issue necessitates consideration and welcomes the involvement of many Non-Governmental Organizations to give counselling and satisfy their additional requirements to assure their mentally preparedness to confront their perpetrators during trial and defend their basic rights. In accordance with Section 39 of the Protection of Children from Sexual Harassment Act, community labourers and doctors interacting at close quarters with the assailants or sufferers must adhere to these principles.

In addition to raising social consciousness, it is crucial to monitor the regulations’ application. In addition to expedited tribunals, facilities and judicial competence must be considered. There must be regulatory protections to facilitate execution at grassroot level as well as prompt judicial remedy. Throughout every government facility, appropriate official instruction and a specific minor’s unit must be developed, comparable to the female’s unit.

Here one realizes the fundamental imperative for responsibility at all levels. Numerous people in our country deny acknowledgement of offences of sexual nature being a significant issue that is threatening the nation’s stability. It becomes crucial to accept that the dilemma stems from the current judicial program’s implementation. The sufferer ought to be given immediate health issue related aid and recompense. Remediation of the minor following the horrific situation ought to be covered by the recompense scheme. They must be given an appropriate forum as well as a setting for voicing their opinion about such crimes perpetrated against them.