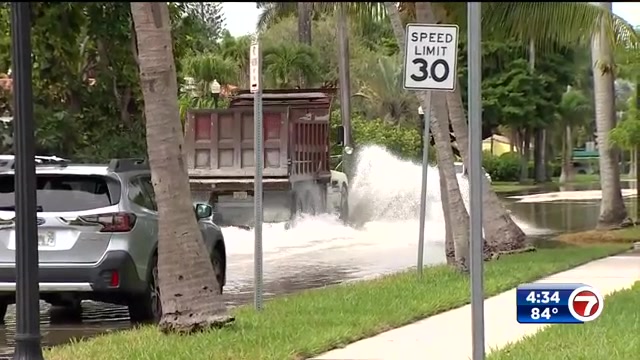 HOLLYWOOD, FLA. (WSVN) – Drivers are traveling through soaked streets in parts of Broward and Miami-Dade counties as king tides make their South Florida return and the region awaits any potential impact from Hurricane Ian.

7News cameras captured water from a storm drain gushing into North Lake in Hollywood. Due to king tides, the drain is full.

“If you have king tide and a rainstorm at the same time, it’s almost impossible to keep it dry,” said Anthony Marutti with Hollywood Public Works.

King tides and significant impacts from Ian would have been much worse.

“I think we’re going yo prevail pretty good with this one,” said Marutti.

The Goldmans have lived in Hollywood Lakes since the 1980s.

“Every year around this time we get king tides, and that high tide, the water comes up without any rain, just floods,” said Rick Goldman.

Sherry Crewss has had her beachside inn, located just a few blocks away, for even longer.

“It’s gotten steadily worse and worse. Every year it gets really bad,” she said.

Still, she knows king tides with no storm is far better.

“The last hurricane that we had, Irma, we had water up to our walkway, up to our steps,” she said.

They’re cleaning storm drains in Deerfield Beach and down the road in Pompano.

They’re scraping in Hollywood and pumping in Miami after king tides flooded streets near Northeast 79th Street and 10th Avenue.

Some rain is coming this week, and king tides here are far more manageable than what the west coast of the state is expecting.

“We would have a little bit higher than normal water levels that would, obviously, be disruptive in certain places but wouldn’t rise to the level of life-threatening,” said James Rhone, acting director of the National Hurricane Center.