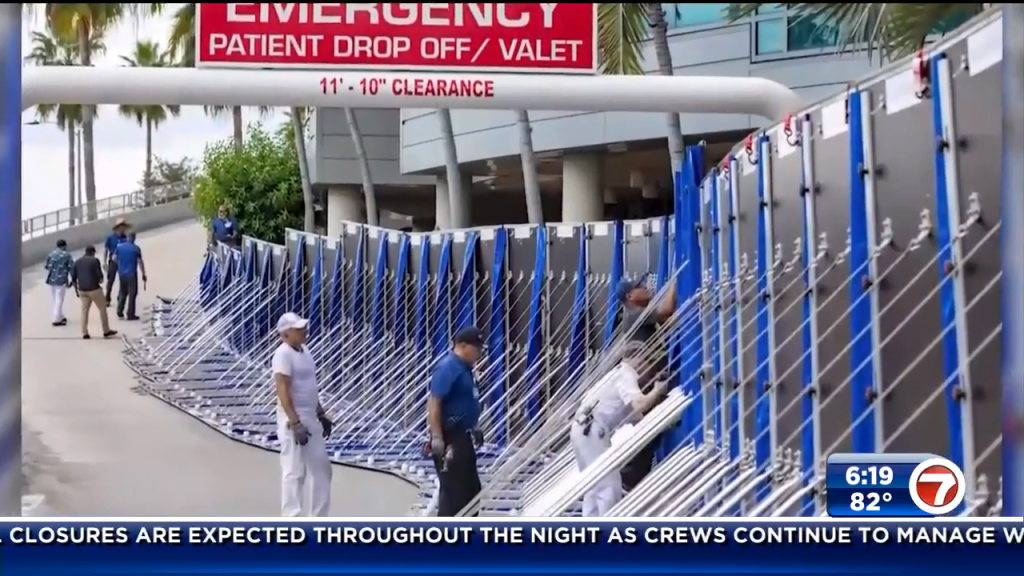 (CNN) — Southern Florida is starting to feel its first storm impacts as Hurricane Ian marches closer to the coast, bringing rain and the threat of tornadoes across parts of Miami-Dade County, Broward County and parts of the Keys Tuesday afternoon.

Ian is growing stronger and will approach Florida Wednesday as an “extremely dangerous major hurricane,” the National Hurricane Center said. Officials in the Sunshine State are pleading with people to flee the peninsula’s west coast ahead of what could be life-threatening storm surge in the Fort Myers and Tampa areas and flooding rains.

Ian, a Category 3 storm packing maximum sustained winds of 120 mph, was over the southeastern Gulf of Mexico around 2 p.m. ET, having made landfall in Cuba early Tuesday as a Category 3, the US National Hurricane Center said.

Up to 16 inches of rain and mudslides and flash flooding were possible in western Cuba, the hurricane center said. Mayelin Suarez, a resident of Pinar del Rio city, told Reuters the storm made for the darkest night of her life.

“We almost lost the roof off our house,” Suarez told Reuters. “My daughter, my husband and I tied it down with a rope to keep it from flying away.”

The storm could make landfall near Venice — roughly a 20-mile drive southeast of Sarasota — on Wednesday night as at least a Category 3 hurricane, meaning sustained winds of at least 111 mph, forecasters said.

“Today is really going to be your last day to … actually move out (of) the storm surge warning area,” Michael Brennan, acting deputy director of the National Oceanic and Atmospheric Administration, told CNN on Tuesday morning.

More than 1.75 million were under mandatory evacuation orders across Florida by Tuesday afternoon. Most were in Lee County, which encompasses Fort Myers. And roughly 2.5 million Floridians total were under some kind of evacuation order, including voluntary ones, across the state, officials said.

In Pinellas County, where more than 440,000 people are under mandatory evacuations, Clearwater Mayor Frank Hibbard told CNN Tuesday afternoon it was becoming too late for residents to leave.

State agencies were also working to help prepare and protect senior residents, conducting on-site visits to nursing homes and assisted living facilities in the path of the storm.

Ahead of the storm, Georgia Gov. Brian Kemp also issued a state of emergency Tuesday, warning of heavy rainfall and damaging winds in the state later in the week.

What the threats are
The storm threatens several perils for west-central Florida:

• Storm surge: A storm surge warning — meaning the surge could threaten life — is in effect for much of Florida’s west coast, from Suwanee in the Big Bend region to the peninsula’s tip in the Everglades.

A warning also is in effect for far northeastern Florida’s coast, from near the Georgia state line down to Marineland, as well as for St. John’s River further inland.

The worst — 8 to 12 feet — is forecast for Florida’s west coast from just south of Bradenton down to Bonita Beach south of Fort Myers, the hurricane center said.

Large storm surge also is possible in areas outside that zone, including Tampa Bay, which could see a surge of 4 to 7 feet, the hurricane center said.

It could rival the highest surge recorded in the Tampa Bay area, around 4 feet from 1985’s Hurricane Elena and March 1993’s “Storm of the Century.”

• Rain: Totals could be 12-24 inches around west-central Florida, including Tampa, through Thursday night, posing numerous flooding threats. It would be two or more months’ worth of rain for the area, as the average September brings about 6 inches of rain there.

• Damaging winds: A hurricane warning — meaning winds of at least 74 mph are expected — covers about 8 million people in parts of west and central Florida — including an area from the Anclote River north of Tampa to Bonita Beach south of Fort Myers.

“You’re really looking at a multihazard, multiday-long event here in much of the western and central Florida Peninsula,” Brennan said.

In Cuba, more than 1 million people live in the three provinces — Pinar del Rio, Isla de Juventud and Artemisa — which experienced hurricane-force winds. The last major hurricane — Category 3 or above — to hit Cuba before Ian was Hurricane Irma in 2017.

Evacuations underway in Florida
The hurricane’s menacing approach to Florida triggered preparations across the state as officials announced school closures and flight cancellations, and the military began moving ships and aircraft.

All along Florida’s west coast, officials are urging residents to get out of harm’s way instead of staying to protect their property. About 2.5 million Floridians were under some type of evacuation order Tuesday, according to state officials.

“Please heed those (evacuation) warnings. You do not need to evacuate to another state. You don’t need to go hundreds of miles away. … The important part is … evacuate to higher ground that is going to be safe from the type of surge and flooding that we’re fearing,” DeSantis said Tuesday.

Mandatory evacuation orders were issued for parts of counties in the hurricane warning area stretching from north of Tampa to the Fort Myers area. That included Pinellas, Hillsborough and Manatee counties in the Tampa area, Hernando, Sarasota and Charlotte counties, and parts of Lee County. Emergency shelters have been opened.

Officials around the region warned Tuesday rescuers may not immediately be able to help anyone who asks for help after staying in evacuation zones.

“We continue to hear folks saying, ‘No, we’ve been through this before; we’re going to stay home,’ (but) you run (a) risk. As a firefighter, it’s hard to get to you when there’s a potential 10-foot storm surge and a foot of water that’s dumped on your area,” said Rob Herrin, fire and rescue spokesperson for Hillsborough County, which encompasses Tampa.

With tropical storm conditions starting Tuesday night, officials are concerned about Ian’s storm surge. The Tampa Bay region is particularly vulnerable to storm surge and could see catastrophic damage from flooding — even if the area doesn’t get a direct hit from the hurricane.

Around the state, residents were waiting in long lines Monday to fill bags of sand or pick up bottled water in preparation for the storm’s arrival.

Resident Khadijah Jones told CNN she was in line for three hours Monday to get free sandbags in Tampa, uncertain if her home will flood. “Just doing the basics … securing loose materials in the yard, sandbags in low areas, and getting items to prep for no power,” she said.

As the storm approaches a slew of closures and cancellations have been announced.

The HCA Florida Pasadena Hospital in St. Petersburg announced it has suspended services and transferred patients.

Colleges and universities across the state — including Bethune-Cookman University in Daytona Beach and the University of South Florida in Tampa — are taking steps to prepare, including campus evacuations or shifting to online classes.

On the K-12 level, at least 26 school districts had announced closures as of Tuesday morning.

Disney World announced some temporary resort closures from Wednesday through Friday due to the weather conditions. At least three cruise lines also began rerouting passengers due to the hurricane.

Help is pouring in ahead of landfall
As residents are urged to leave, officials are staging people and equipment to quickly respond when recovery begins.

The Florida National Guard has 3,200 troops on active state duty to help with hurricane response efforts, and another 1,800 troops on standby can be activated if needed, Pentagon spokesperson and Air Force Brig. Gen. Pat Ryder said Tuesday.

“The President’s action authorizes the Department of Homeland Security, Federal Emergency Management Agency (FEMA), to coordinate all disaster relief efforts which have the purpose of alleviating the hardship and suffering caused by the emergency on the local population,” the White House said in a news release.

US Department of Health and Human Services Secretary Xavier Becerra declared a public health emergency for the state of Florida — a move meant to give health care providers and suppliers greater flexibility in meeting emergency health needs, his office said.

“We will do all we can to assist Florida officials with responding to the health impacts of Hurricane Ian,” Becerra said. “We are working closely with state, local, and tribal health authorities, as well as our federal partners, and stand ready to provide additional public health and medical support.”