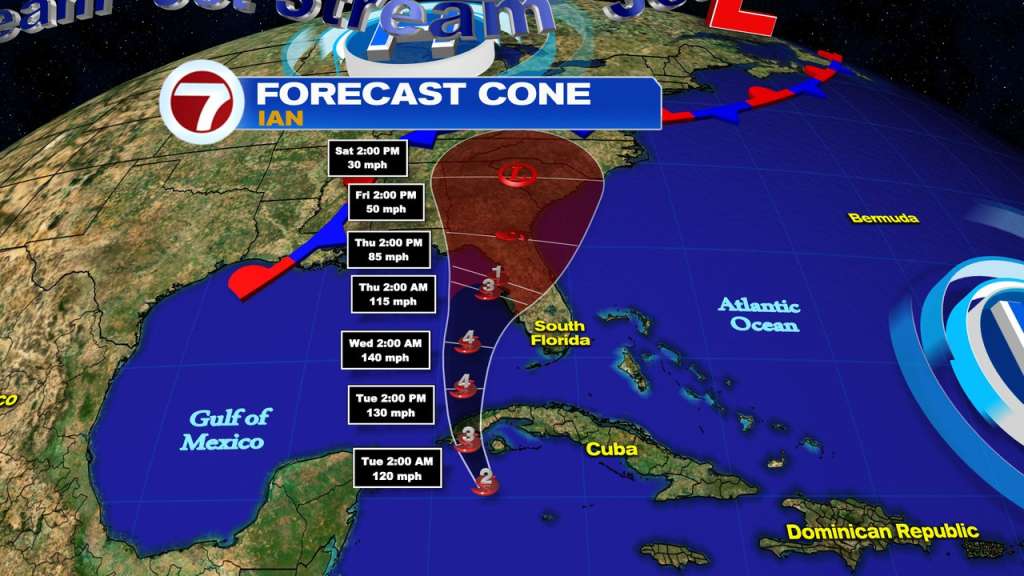 Hurricane Ian becomes the 4th hurricane of the season and is forecast to rapidly intensify in the Northwestern Caribbean Sea. It should be a major hurricane when it moves near or over Western Cuba tonight. A slower forward speed is expected on Day 3 and most models along with The National Hurricane center have shifted the forecast track slightly to the East. Therefore, a track very near or over the West-Central coast of Florida is becoming more likely.

Models continue to show a large spread after 72 hours showing that the exact track is still uncertain and would change the potential impacts throughout the state, including South Florida can experience with Ian close by. That is why the cone of concern remains pretty wide towards the end of the forecast period.

A track closer to the East coast would mean landfall happens sooner and more impacts expected across South Florida due to the fact that we will be on the wettest side.

A track more to the West would mean that landfall would happen later and there would be a prolonged event of heavy rain, wind and flooding for Florida and around vulnerable areas like Tampa. However, it seems like the more Eastward track is becoming more likely. In fact, the surge around Tampa could be significant between 5 to 8 feet and they have not been directly impacted by a storm since 1921.

The Florida Keys from the 7 mile bridge to Key West, including the Dry Tortugas under a Tropical Storm Warning and now the West coast from Englewood to Clearwater, including Tampa Bay under a Hurricane Watch.

A Tropical Storm Watch is also now in effect for the middle Keys.

King Tides are returning this week, so water levels will be running higher than normal. Unfortunately with Ian forecast to be a major storm just to our West, strong winds blowing onshore during times of high tide could cause flooding. Storm Surge Watch in effect for the Florida Keys from Card Sound Bridge Westward to Key West and the Dry Tortugas. There is also one in effect from Card Sound Bridge to Anclote River and Tampa Bay.

About 2 to 4 ft Storm Surge possible for the Florida Keys.

The probability continues to grow that tropical storm-force winds 39+ mph will be experienced in the Lower to Middle Florida Keys.

Rain and flooding will be our biggest worry here in South Florida and a more Eastward track would imply these totals going up. For now, about 3 to 8 inches of rain possible.

Other possible impacts for South Florida will be gusty winds between 30-40+ mph as some of the occasional outer bands move in and out. Also, the outer bands could spin up an isolated tornado.

Stay tuned to your Storm Station for the latest!