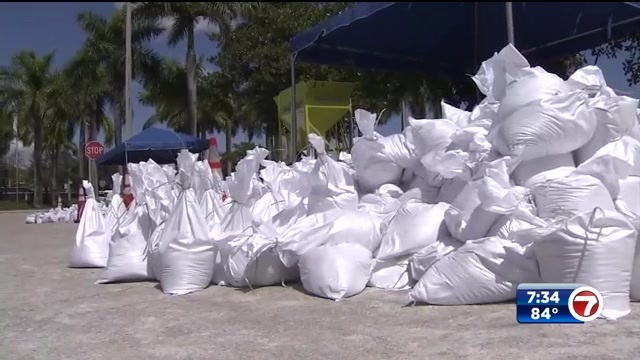 MIAMI (WSVN) – Although South Floridians are not expecting a direct hit from Tropical Storm Ian, heavy rains could still be causing damage in the area, so residents are taking steps to protect their homes.

7News cameras on Sunday captured residents in Miami filling up bags with sand at one of three locations where the city is hosting sandbag distributions.

At the top of residents’ minds is uncertainty about where the system, which is currently gathering strength in the Caribbean, will make landfall after it enters the Gulf of Mexico this week.

“You don’t know what this storm is going to do,” said a resident.

But those who spoke with 7News said they’re not taking any chances and are preparing for heavy downpours and street flooding.

“We haven’t had a storm in a long time, so, I mean, I’m very concerned about it,” said resident Elisia Dickerson. “You never know what will happen.”

To make matters more worrisome, the storm’s impact is occurring when king tides will be present. It’s a time of year when tides are higher than normal, and streets and other areas are temporarily flooded, even when it’s not raining.

To alleviate the flood frustration, cities like Miami and Fort Lauderdale are giving out free sandbags to their residents.

City officials are also pinpointing the areas to mitigate where flooding historically happens.

The goal is to prevent street flooding from being an issue this go round.

“We conduct street sweeping near pump station areas, and we identify areas for additional temporary pumps, and also storm drain cleaning to help with flood water drainage across the city,” said Sonia Brubaker, Chief Resilience Officer for the City of Miami.

Although Ian’s impact in South Florida remains uncertain, residents picking up sandbags said they’d rather be prepared now, before it’s too late.

“A little less concerned today, but it’s always better to be safe,” said a resident.