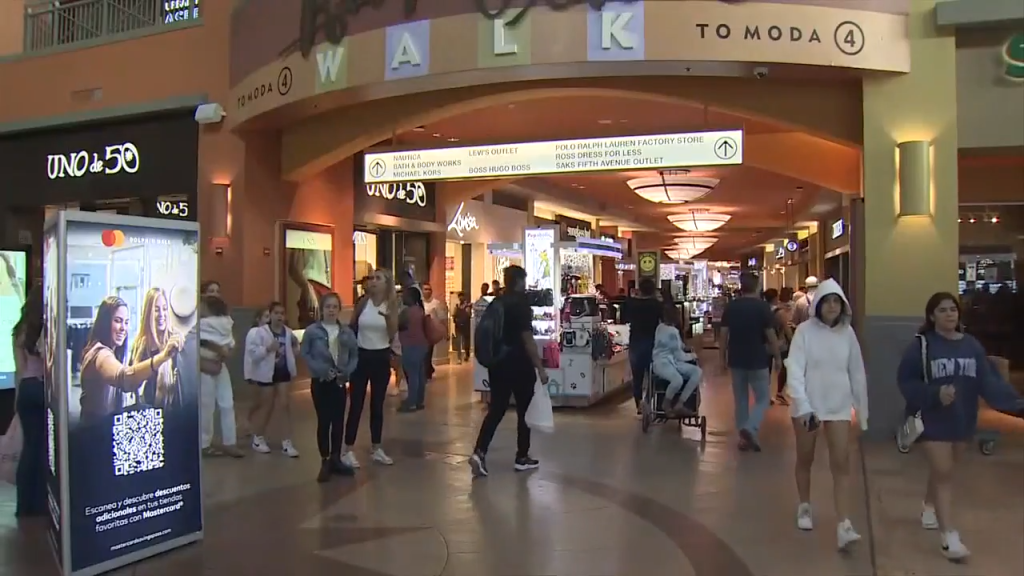 SWEETWATER, FLA. (WSVN) – Malls across South Florida are starting to get packed with holiday shoppers.

On Wednesday, families felt the holiday magic at Dolphin Mall after it kicked off its Winter Wonderland to mark the start of the busy shopping season.

“This is a spectacular thing the kids get to enjoy,” said Madeline Bello Calvar, a marketing sponsorship director. “They don’t get to see snow for real but they get to see it here at Dolphin Mall.

Children are not the only ones who will be able to indulge in the holiday festivities. Shoppers will come in the millions to shop all across the U.S.

“W’re very fortunate to say that it’s been picking up for a week now,” said Calvar. “We’ve been starting to see the traffic pick up for Black Friday, but it’s nothing like Black Friday.”

According to the National Retail Federation, there will be more than 166 million people shopping nationwide between Thanksgiving and Cyber Monday.

Officials said that is 8 million more shoppers than last year.

“Today’s shopper is very savvy when it comes to shopping around and finding what works best for them,” said Katherine Cullen with the NRF.

As people shop for special holiday gifts, law enforment agencies plan to have officers and undercover officers all over the building to try to help keep patrons safe.

“I want anyone thinking of doing something that they shouldn’t [to know] that we have many units out there in unmarked vehicles and undercover units that are there to protect and serve,” said Chief George Fuente with Hialeah Police Department.

Security guards will also be on patrol to help keep shoppers safe.

“We’re deploying an unbelievable amount of police officers that are going to be here throughout the whole week and upcoming weeks,” said Executive Officer Jonathan Arche with the Sweetwater Police Department.

Authorities said if someone sees anything suspicious to immediately call the police.

Meanwhile, in Miami Gardens, BrandsMart USA is set to open at 4 p.m., Thursday to start receiving patrons for their Black Friday deals.

Barriers are already up and surrounding the store for shoppers to await the opening of the retail shop.

Experts said Black Friday should be spent shopping for televisions, gaming consoles, toys and appliances while Cyber Monday should be computers, laptops, clothing, cameras, travel subscriptions and even online subscriptions like Netflix.