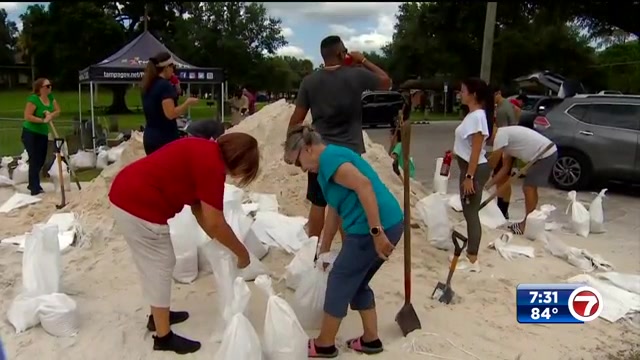 TAMPA, FLA. (WSVN) – Floridians in Tropical Storm Ian’s path are not waiting to make sure they’re ready to face the full force of the system.

One of them, a Rhode Island woman who identified herself as Robert, said she and her neighbors waited two hours.

“This is a first. I’m a little concerned, but I feel better now that we’ve got these,” she said.

Roberta said she has only lived in Tampa for a few years, but she’s learning fast about storm preparedness.

“Well, now I know where the flood zones are and what you need to do if something severe happens, just go do it,” she said.

Many people in the Tampa Bay area spent part of their weekend waiting for hours to receive free sandbags from the city.

The line at Macfarlane Park stretched around the block, as Ian keeps Floridians watching and wondering.

When asked how he’s feeling, resident Hunter Szostak replied, “Kind of nervous, waiting for that next update to come out on the radar.”

Also waiting her turn was Dr. Angela Gonzalez, an OB-GYN.

“We are getting a lot of phone calls from patients, you know, not wanting to get stuck and not being able to make it to the hospital or be stuck at the hospital, both ways,” she said, “so they’re definitely worried, and we’re just trying to let them know that we’ll take care of them either way.”

Florida Gov. Ron DeSantis announced Sunday that he has activated the National Guard across the state.

“There are some models that want to tug this thing more deep into the Florida Panhandle. There are also some that want to bring it for landfall in the Tampa Bay region,” he said.

“You need to be prepared for sheltering in place. You may lose power for multiple days,” said Kevin Guthrie, the director of the Florida Emergency Operations Center. “Make sure you have enough food and water that you can prepare while you’re sheltering in place.”

The family of little Jakarii Reed said they’ve taken steps to ensure they’re ready, so they felt comfortable going ahead with his first birthday party, just across the park from the people waiting for sandbags.

“It’s his first birthday. You only have one [first] birthday,” said Artissia Stroud, Reed’s mother. “I mean, if I would have waited, then – ’cause maybe next weekend, it would’ve been flooded.”

So out came the sodas, the goodie bags and the banners/

Just a few yards away from Reed’s family, people with shovels walked away with sandbags, as they hold onto hope.

“I’m not moving, so I’m gonna stay anyway, no matter what” said Roberta. “There’s always some bad weather someplace, so this is just something that I’ll have to deal with, that’s all.”