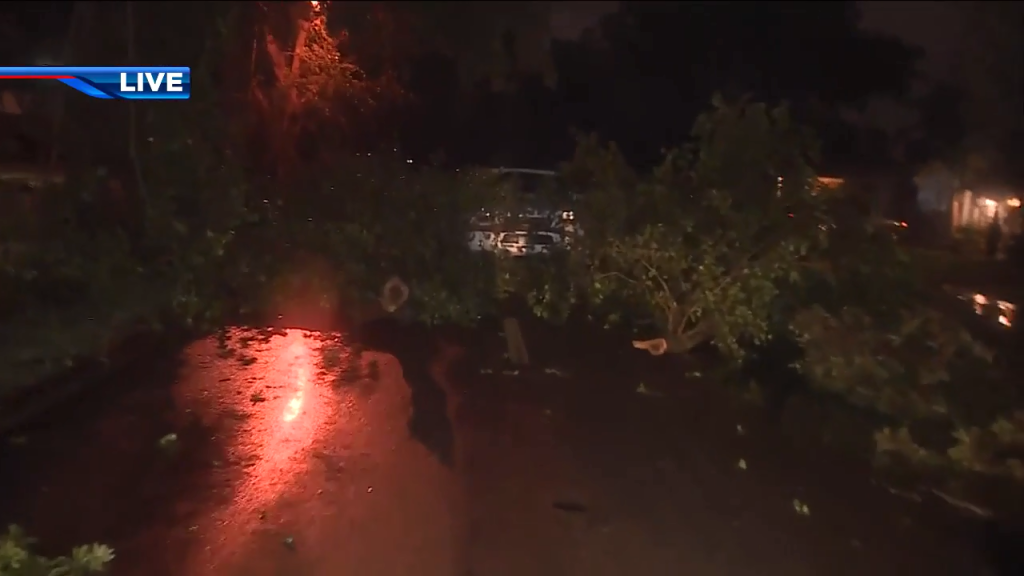 Tuesday night, a Pembroke Pines neighborhood was barely damaged when the tornado passed by.

Gill lives in the neighborhood near Pasadena Elementary and said around 7:30 p.m., he received a tornado alert on his phone, which led him to take a look outside and see what was occurring.

“I looked outside and heard the familiar freight train sound, locked up the doors and all of us went into the interior bathroom inside the house,” he said. “You can actually hear it through one of the doors that goes out to the patio. It was extremely loud, so we didn’t know what was going to happen.”

Gill said it had to have been a tornado that didn’t stick around that long.

“I’ve never heard a sound like that in any of the storms, and I’ve been here a long time,” he said. “I think it was about 45 seconds, and then it was just quiet.”

Some of the homes experienced power outages but for Gill, at least, his power came back on.

Once the coast seemed to be clear, Gil was curious and decided to take a look outside.

“It wasn’t clear when you walked out, and the garbage can had moved a little bit, and you go, ‘OK, that’s kind of interesting,’” he said. “But once you go up the street here and down west on Pasadena Boulevard, you can see where all the damage was.”

Gill told 7News that when he came outside he also saw someone in their car had been trapped under a tree, presumably caused by the strong winds of the tornado.

Neighbors helped the person get out of the car and began cutting up the tree.

Gill said his neighbors are good people and always help each other out.

“Neighbors were here just trying to help each other,” he said. “Yeah, they’re all good people.”

Hurricane Ian may be targeting the west coast of Florida but South Florida is surely feeling its effects with the outer rainbands, but Gill said he’s been through this before.

“I’ve been through Andrew, I’ve been through Wilma, and all the other ones in between, but this one is definitely the most unusual and was basically my first tornado,” said Gill. “I’ve never experienced it before.”

There was no extensive damage on any homes in the area.