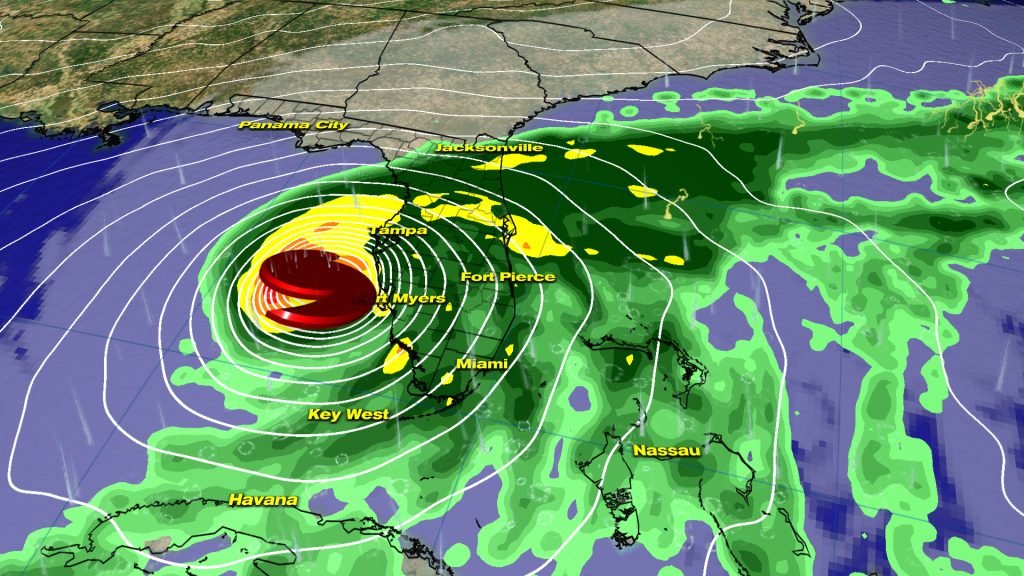 Tropical Storm Ian continues to struggle to organize and intensify but conditions will be favorable for intensification later today and into tomorrow over the northwestern Caribbean Sea. While the long range track of Ian remains uncertain, we are beginning to get a better idea of what impacts South Florida will get from Ian.

In the short term, Ian is forecast to pass well southwest of Jamaica today as a strong tropical storm. Then the center will pass southwest of the Cayman Islands on Monday as a Category 1 to 2 hurricane, where a Hurricane Warning and Tropical Storm Watch are in effect.

By Tuesday, Ian is forecast to become a major, Category 3 hurricane as it nears or moves over western Cuba. As a result, a Hurricane Watch and Tropical Storm Watch are in effect across western Cuba.

During the middle of this week, the center of Ian will move over the eastern Gulf of Mexico. It is projected to continue to intensify into a Category 4 hurricane on Wednesday.

Much of Florida remains in the cone from central Florida through the Panhandle. The current cone, as of the 5 am Sunday advisory from the National Hurricane Center, shows that the center of Ian can track anywhere from the Tampa area through the Pensacola area, with landfall possible between Wednesday night and Friday.

While South Florida is out of the cone, we are still anticipating impacts from the storm.

Heavy rain and flooding are the most concerning threats. The outer rain bands of the storm will begin to pivot into South Florida during the day on Monday. Activity will start to increase Monday night and especially on Tuesday into Wednesday when more persistent rounds of rain, some of which will be heavy, are forecast. Starting Thursday, the worst of the rain should be over but we can still see some lingering showers. A general range of 3-7 inches of storm total rainfall is forecast.

The Weather Prediction Center has placed all of South Florida in a level 2 of 4, slight risk for flash flooding on Tuesday.

In addition to the rain, there will also be some wind. Some of the showers and storms could pack winds of 30-40+ mph. Sustained, tropical-storm-force winds (39+ mph) are not expected. The greatest risk, which is near 50%, will be across the lower Keys.

Lastly, isolated tornadoes and minor coastal flooding will be possible.